The COSSIM consortium proudly announces the public release of the open-source version of the COSSIM Simulation Framework!

We are happy to announce that we are officially releasing the COSSIM Simulation framework along with all the source code, required documentation and examples. You can find all required repositories here: https://github.com/H2020-COSSIM .

The source code includes all parts of the framework and more specifically provides the following packages:

– a modified version of the gem5 simulator (cgem5) including all modifications needed to connect the simulator with the rest of the COSSIM framework components through IEEE HLA interfaces
– a modified version of McPAT (cMcPAT) that extends and improves McPAT while providing all necessary scripts to connect to cgem5 and handle simpler CPU models
– a modified version of CERTI able to handle efficiently large number of connections
– libraries and projects for OMNET++/OMNEST that provide the necessary modifications and adaptations of the network simulator for the COSSIM framework
– a GUI based on OMNET++’s Eclipse for instrumenting and visualizing the simulation process and
– all documentations and examples required to install COSSIM framework, as well as setup, instrument and execute a simulation process.

Briefly, COSSIM Simulation Framework interconnects gem5 with a network simulator (OMNET++/OMNEST) through the IEEE 1516 HLA protocol. As such it enables the simulation of whichever combination of systems along with a multitude of possible network topologies and connections. Since the HLA is an IP-based protocol, all interconnections between gem5 instances and the network simulator can run independently and even in different machines, thus making the overall simulation distributed. Additionally there is a GUI that can be used to instrument the simulation and the network traffic and interactions can also be visualized. Lastly, a custom version of McPAT is included interconnected with gem5 and featuring certain enhancements and additional xml templates.

We have already completed simulations comprising of several hundreds of nodes (using a mix of ARM and x86 nodes) and the solution proposed scales well. The framework implements all the required synchronization mechanisms for correct execution. We have validated the simulator with three real world applications and several benchmarks.

We welcome all feedback and comments as well as possible suggestions or collaborations!

COSSIM is funded by the European Commission under H2020 framework 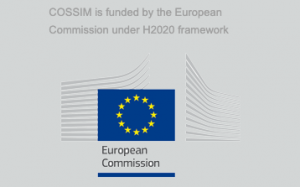